If a knife is used by our troops, then you know it's a solid and reliable blade, here is a list of knives used by the Armed Services.

Folding knives and fixed blade knives issued to the armed forces play a very important role. If a knife is used by our troops, then you know it"s a solid and reliable blade.  For this reason, people are attracted to U.S. military knives. Producers of military knives often have huge amounts of sales as people want to be associated with their brand. While it is interesting to note the different knives carried by the various Special Forces, it is equally important to consider smaller companies with a proven track record of sales directly to to our military service members.

Off-Grid Knives has a Military knife category if you're looking for a military grade blade that"s been tested and abused by our troops in the field (as well as law enforecement).

What Knives Are Issued to the U.S. Armed Forces?

If you take a look at a manufacturer’s website, it will seem as if every military group carries hundreds of different knives from their brand. Custom makers and knife producers send their products to all the Special Forces in the hope that they will choose their brand. While some are successful in their mission, others fail because their knives are not fit for purpose. Soldiers in the armed forces are repeatedly thrust into difficult situations so they need the best kind of equipment which can perform unfailingly in every scenario.

Following are some of the top knives that are issued to the U.S. forces:

The U.S. Armed Forces officially used this folding knife in 1984. This is a utility knife bayonet which can also act as a wire cutter. The knife blade is about 7 inches long and resembles its predecessor, Buck 184.

The Off-Grid Knives Tracker-X is a no-nonsense rough-use fixed blade knife. The Tracker-X is a mid-sized knife with a wide belly, high flat saber grind with D2 tool blade steel. We added grippy 'snakeskin' milled Micarta scales with a thick handle that fits large hands with or without gloves. Included is a custom Kydex sheath with a Quick-Clip™ belt loop that can be switched to horizontal carry.

Tracker-X Blackwash Fixed Blade Knife
Built like a tank, the durability of the Tracker-X is pretty insane. This thing could get hit by a meteor and still hold a decent edge. - David
Shop Now

The Cleaver Hoglet EDC is a fat belly fixed blade, made with cryogenic AUS8 steel with excellent corrosion resistant and tough full tang construction. Under the 550 survival paracord is a skeletonized, lightweight and strong frame that can be used in camping or survival situations. Use as a boot knife, or neck knife, clip it to your belt or pack with the Quick-Clip Kydex sheath, the Hoglet makes a perfect lightweight hiking and fishing tool. 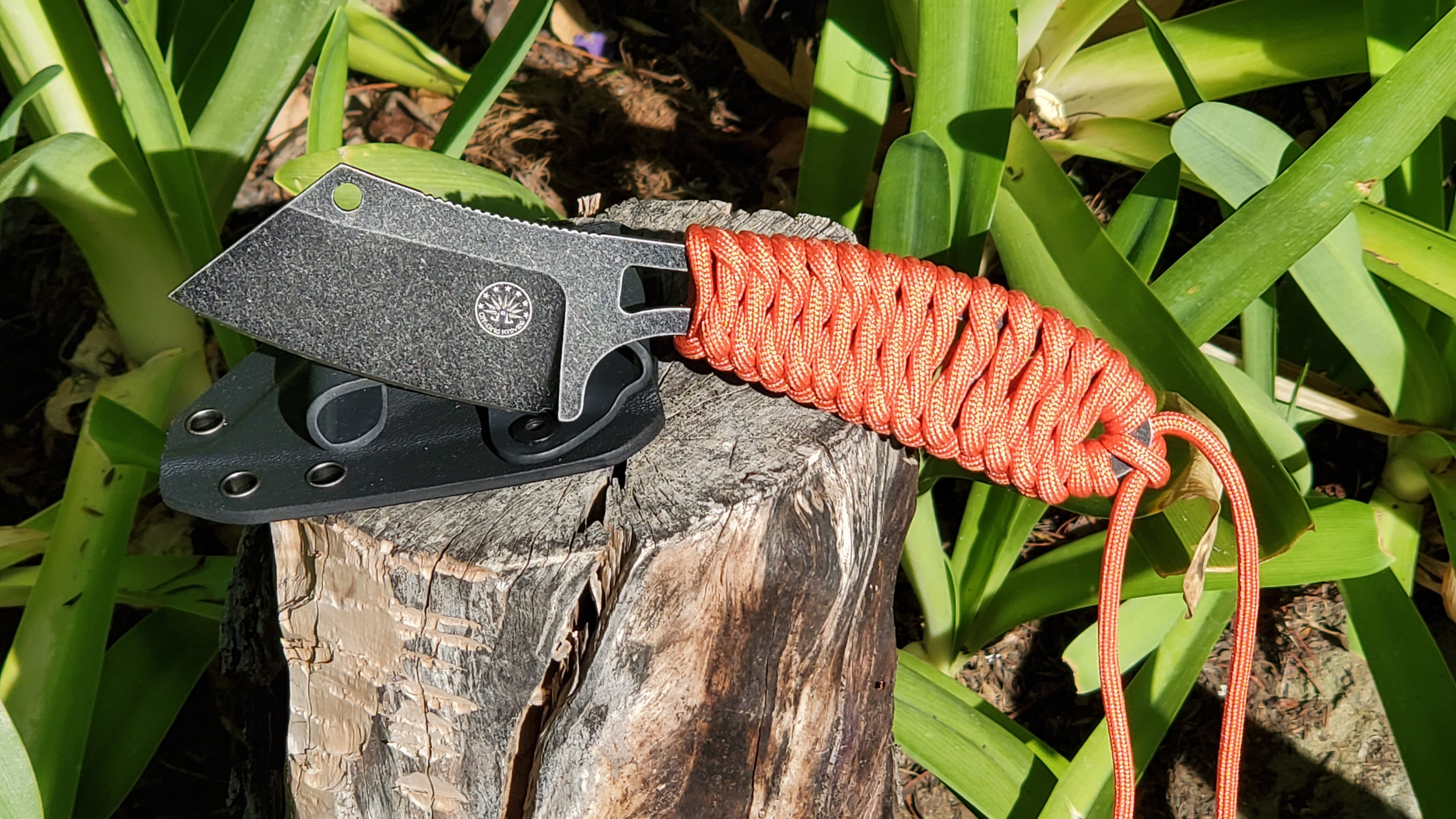 During the War on Terror in 2003, the Detachment One unit came together. Due to their special circumstances, they decided that they required a different kind of knife exclusive to their unit. Strider SMF was the ultimate choice due to its compactness and reliability. Titanium is used in the production of these knives which makes these knives resistant to wear and tear and therefore, they have long useful lives.

The blade shape resembles the mighty rhino horn, the Rhino blade has a large and very versatile blade shape. The D2 Rhino blade rides on high quality ceramic ball bearings, very smooth effortless deployment and locks up like a vault. The ergonomic large handle and scales are made of G10, comfortable with gloves or without. 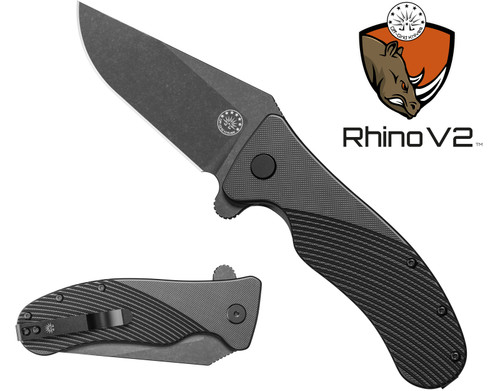 Rhino Blackout Knife
Action on the Rhino is smooth, fit and finish is great. Perfect knife for someone who wants a fixed blade size knife but a folder. - James
Shop Now

The Ka-Bar encapsulates exactly what U.S. Special Forces seek in their knives. It is a classic weapon which was produced during World War 2 because none of the other weapons met the needs of these forces. The armed forces use their tools for a variety of purposes besides fighting. The Ka-Bar is an effective knife because not only does it lend itself well in combat situations but it can also be deployed as a crate opener or wire cutter. Due to its versatility, it is a popular choice among U.S. forces.

The Off-Grid Knives' "Alpha-Dog" is a one pound, bomb proof, full tang, wide radius blade with a beefy handle. We used G10 scales for durability and strength with a thick and wide ergonomic handle that fits large to extra large hands with or without gloves. Included is a custom Kydex sheath with an easy thumb-push release and detachable Nylon/Velcro button lock belt loop. 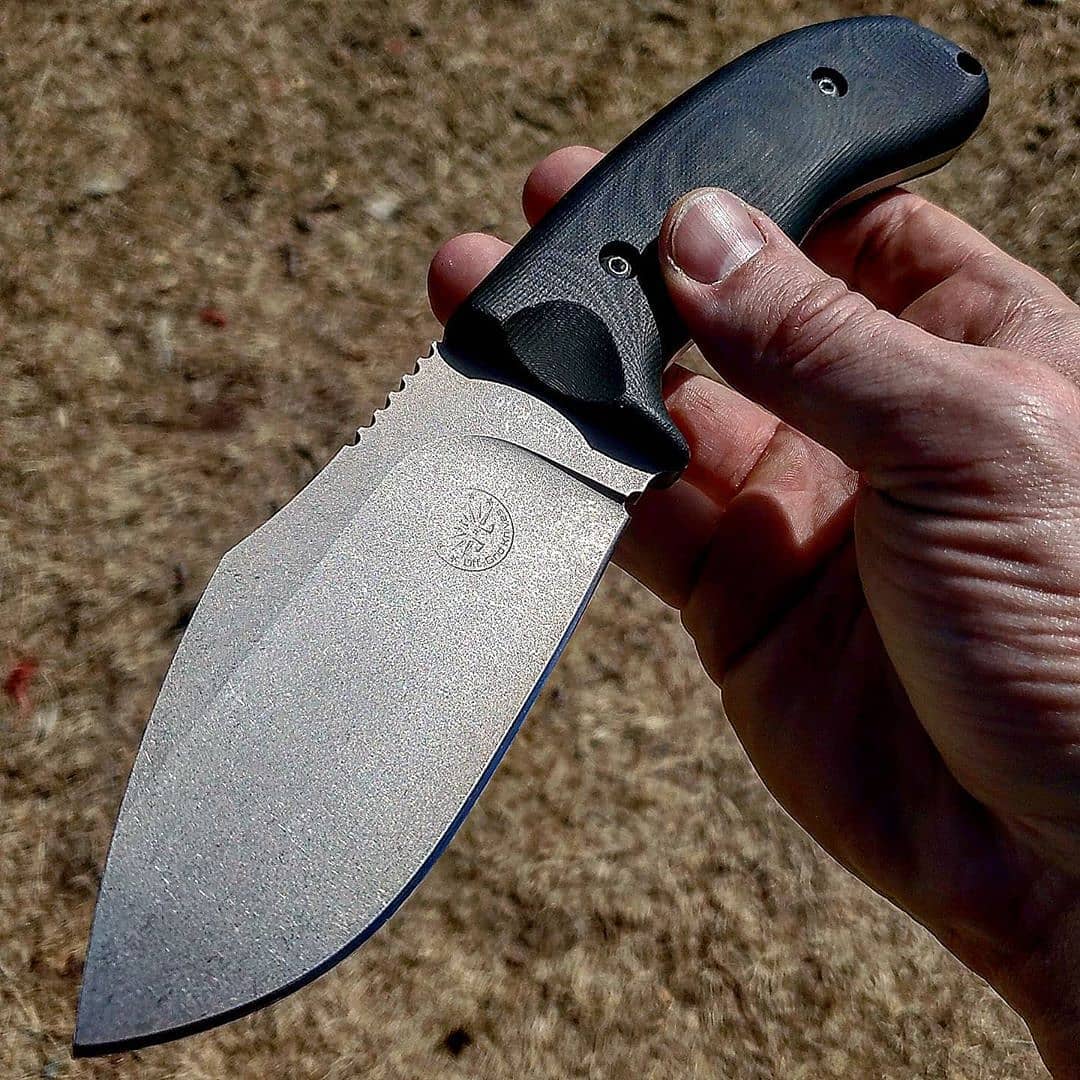 This knife was introduced to the U.S. Army in 2003. However, other branches of the armed forces have also adopted this knife due to its light weight and practicality. It comes with a 5 inch blade and a sizeable handle. This means the user’s hand will not slip forward easily which can be useful in hazardous combat situations as it prevents unnecessary injuries.

Leave your hatchet at home, the OGK Tracker-X is a no-nonsense rough-use fixed blade knife. The Tracker-X is a mid-sized knife with a wide belly, high flat saber grind with D2 tool blade steel. We added grippy 'snakeskin' milled Micarta scales with a thick handle that fits large hands with or without gloves. Included is a custom Kydex sheath with a Quick-Clip™ belt loop that can be switched to horizontal "scout" carry.

Tracker-X Stonewash Fixed Blade Knife
It's big enough to get some deep cuts in, but agile enough to do more delicate work. - Topher Loafer
Shop Now

It is obvious that the U.S. forces always buy the most high quality knives. On the other hand, civilians should consider their own personal circumstances as well when thinking of buying a folding knife. When you see an ad for U.S. military knives for sale, you know you will get a quality product.