The ultimate way to enhance the visual aspect of your knife and show of your skills is by mastering tricks, this is a few to get you started.

Everyone wants a knife that performs well and looks great. The ultimate way to enhance the visual aspect of your knife and show of your skills is by mastering tricks.

Tricks have the additional benefit of demonstrating your ability to wield the knife. This signals to others that you are proficient with the blade and acts as a warning, potentially avoiding the need to use it for self-defense.

Tricks have the additional benefit of demonstrating your ability to wield the knife. This signals to others that you are proficient with the blade and acts as a warning, potentially avoiding the need to use it for self-defense.

Some tricks even enhance practical usage by increasing the draw speed from a holstered position to an open knife.

This should be an essential trick for any knife owner. The flick open allows for fast opening with a single hand, which improves the effectiveness of a knife in any scenario. Saving time could be critical in a moment of urgency and mastering the flick opening will mean you won’t let yourself down when it counts.

Perform the basic flick opening on a pocket knife by gripping the handle, and flicking the knife with the momentum at the tip of the stored blade. With enough power, this should send the blade flying out, overpowering the spring assist that is keeping the blade closed.

Failing to use enough power will only half open the knife or fail to reveal the knife from the handle. It is important that the power transferred is enough to overcome the friction between the handle and the blade. 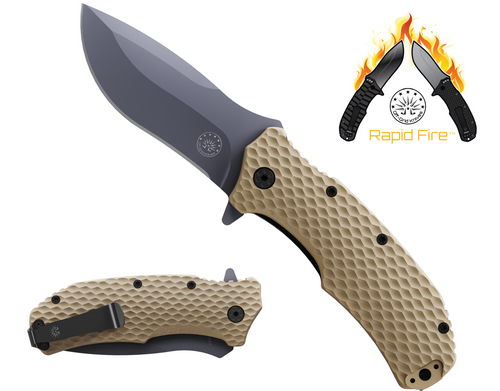 Rapid Fire Coyote
Here's what I think: This thing is a BEAST! Blade is made for serious work. Handle feels good in my hand and feels nice in my pocket. - TB96762
Shop Now

Essentially the opposite of the above trick. Note that it is important to push the release on the knife, in order for it to close with momentum. Otherwise, it may stay in the open position. This depends on the exact knife as some are simply held open with friction.

Check the specifications of knives for information when looking for a spring assisted flipper knife for sale online.

Flick the knife with momentum and speed maximized at the tip of the open knife again. Extra force may be required to close a spring assisted flipper knife, as the spring will be holding it in place. Make sure your hand is not in the way of the blade entering the handle, as this could bring the cutting edge down on your fingers.

A flick close is a good way to store your knife immediately. As long as you perform the trick safely, it is a smart way to remove the knife from sight, where it might cause controversy or concern. This is a valuable tool in keeping your knife secure and using your blade safely.

The flick closing also is eye-catching, and demonstrates your competence with the knife, much like the flick open does. 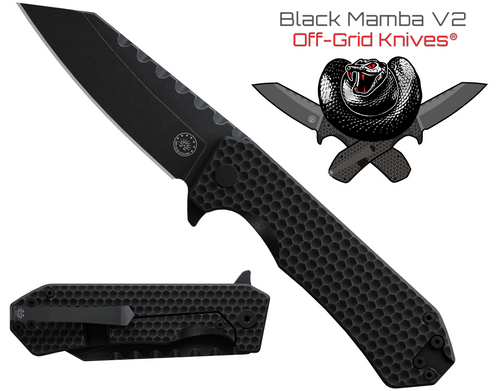 Black Mamba Knife
The deployment is the smoothest I have ever experienced on any knife, period. You could easily mistake it for an "assisted"! -  Veggie Delight
Shop Now

While the pinwheel doesn’t serve much of a functional purpose, it’s a neat trick that can impress onlookers and create admiration for your knife skills.

Ideally, you would perform a pinwheel with a butterfly or balisong knife. This is due to the split handle that enables additional movements.

Mastery of the pinwheel creates a dazzling effect and is famously featured in online games such as Counter-Strike: Global Offensive.

Scorpion Blackout
The Scorpion surpasses everything else in my collection. - HB
Shop Now
OVERBUILT HARD USE KNIVES
Our knives are over-engineered for all of your off-grid adventures.
CHECK OUT OUR PRODUCTS
×