Unpredictability is something that is constant when you consider going on adventures. But, that does not mean you cannot be prepared.

What is your take on combat weapons? Strong, sharp, steady, and cool? If you think this you are right. Today we will talk about one such type of knife - Bowie Knife.

Apart from combat and self-defense situations like hunting or a brutal survival situation, this bowie knife can be used as a multi-tasker as well. The knife is tried and tested. The one thing that you can be sure of is this knife is practically a part of the American knife tradition itself.

So, let us first learn about the history of these knives a bit more. 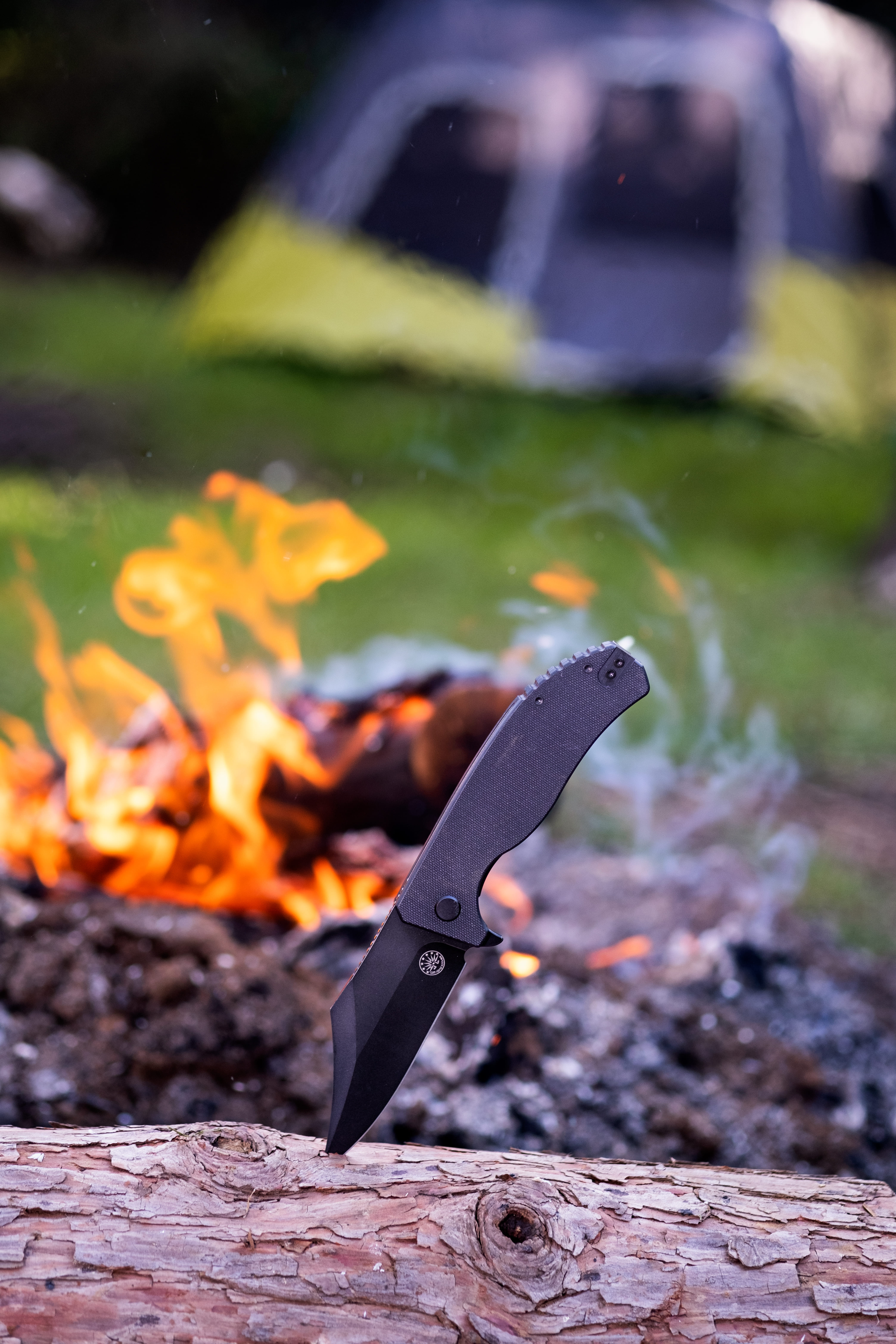 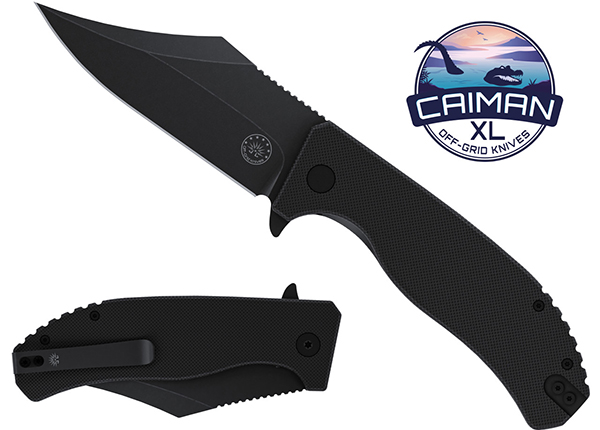 CAIMAN XL
I was a strong proponent for Off-Grid to made a larger version of the Caiman, now the XL is here and I couldn't be happier. Love the upgrade to 14C28N, the blade is wicked sharp and intimidating, and the action is smooth and snappy as usual, get it, you won't be able to put it down. - Dan B.
Shop Now

History of the Bowie Knife

The origin of the knife dates back to the 1800s. It is named after the creator himself - Rezin P. Bowie.

In 1938, while the bowies lived in Avoyelles Parish, Louisiana, Alamo hero James Bowie's brother Rezin bowie claimed to have made the first bowie knife. Once, James Bowie had been shot in a fight. So, Rezin Bowie designed a hunting knife and gave it to his brother.

Blacksmith Jesse Clifft was the one who forged this classic American design fighting knife as per Rezin's design. He lived on Bayou Boeuf and was a close friend and neighbor of the Bowies in the 1820s. Herzehian Dunham, Notary Public in Avoyelles Parish certified this data. 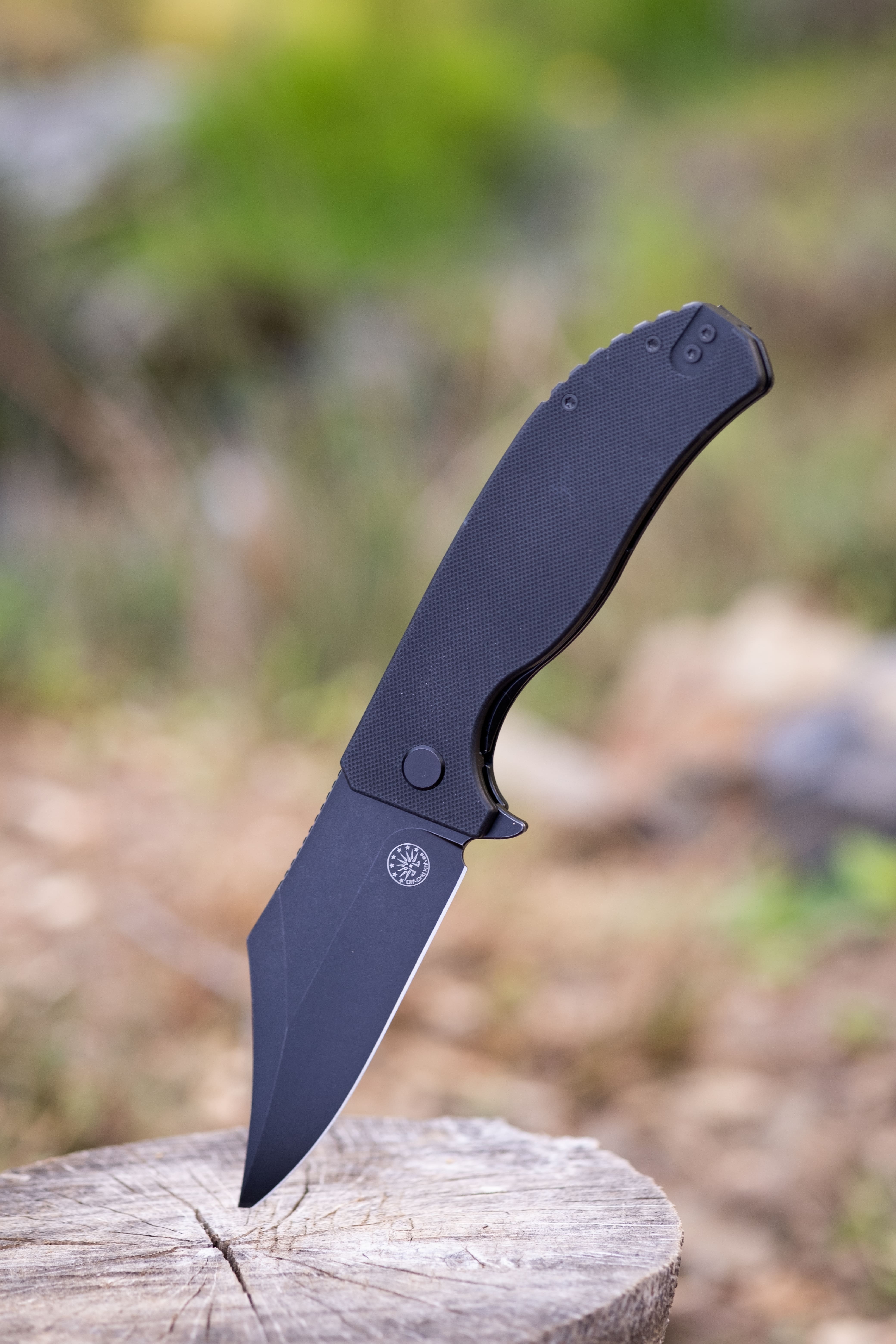 The original Bowie knife design had a silver blade with no silver mounts. It looked like a butcher knife. Bowie carried it in a silver-mounted black-leather sheath. The bowie knife became infamous after the infamous Sandbar fight in Natchez on September 19. 1827.

The Bowie knife has a lot to offer although it first became known for an unfortunate reason. But, this fight solidified this knife known as a great combat weapon.

Features of a Bowie Knife

These knives have gone through many small changes over the years. But there are some things that have been common among these knives. One of them is always a fixed blade, never a folding one so it requires a sheath to carry it. A bit uncomfortable to carry but required.

Also, another common thing is their length which is between 5-12 inches. So, you get quite a badass knife for your buck. But, you need to remember that since it's a big blade, you need some provisions to carry it like a sheath or something.

But, OffGridKnives has found a solution to it. More about that later in the blog.

As far as materials are concerned, high-carbon steel is an option. If we had to say we prefer two materials. One is D2 steel. This is because they are mostly preferred for high-end knives because of their great balance of toughness, resistance, and hardness. Another option is 14C28N. 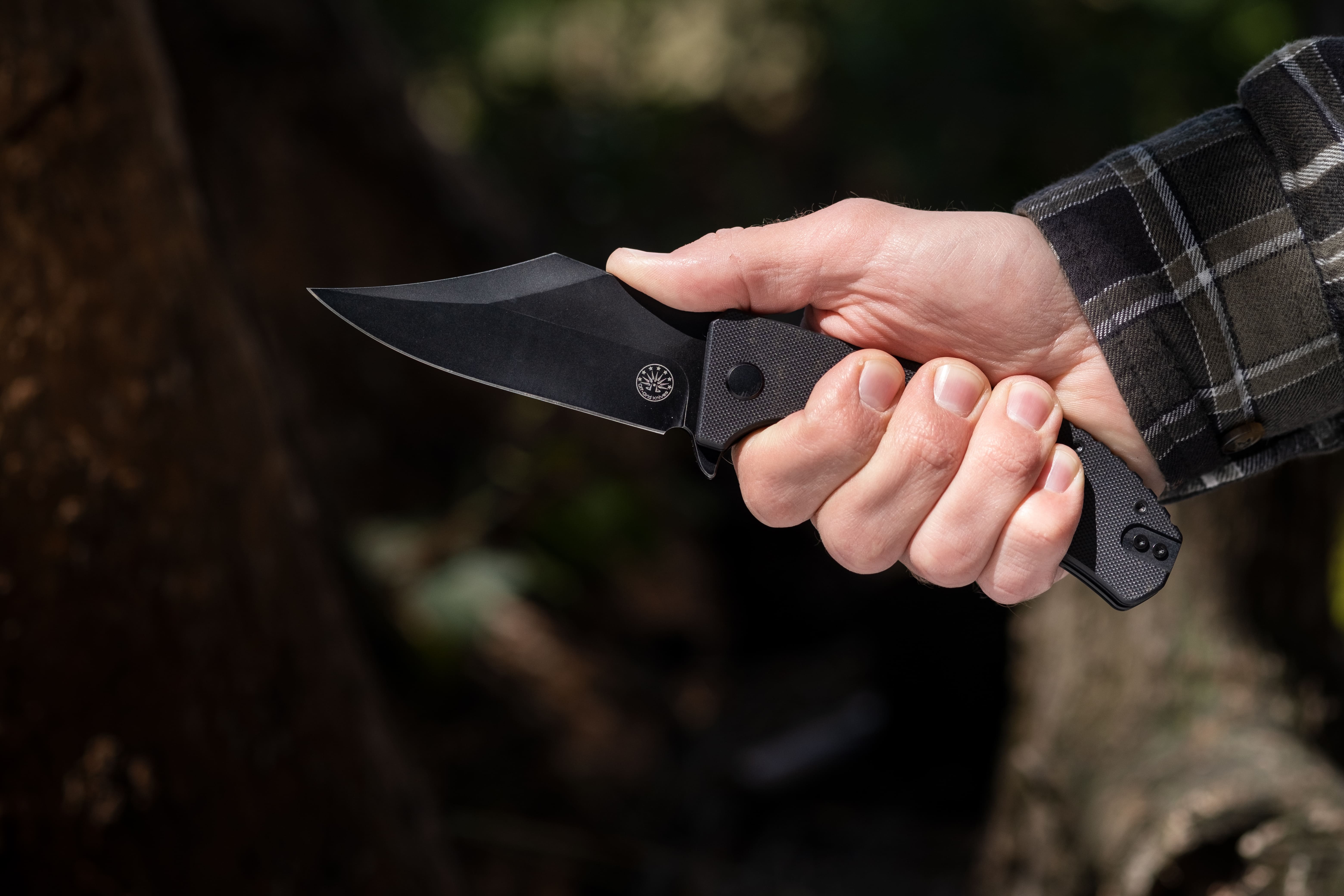 CAIMAN XL
I was a strong proponent for Off-Grid to made a larger version of the Caiman, now the XL is here and I couldn't be happier. Love the upgrade to 14C28N, the blade is wicked sharp and intimidating, and the action is smooth and snappy as usual, get it, you won't be able to put it down. - Dan B.
Shop Now

What if you have to choose between the two?

You see D2 steel is tougher and has better edge retention compared to 14C28N. But, when you consider sharpening and corrosion resistance, 14C28N is a better choice. This is because it has high chromium content and less carbon content than D2 steel.

What about the tip?

The tip is mostly a clip point. As previously discussed in their history, they resembled the butcher knife. But, as time progressed the tip turned to a more narrow one. We know this as the clip-point blade. Since then the knife makers have never looked back.

You just heard about the history of these knives. This clarifies one more point. That is these knives have been tried and tested for a very long time. So, yes they are reliable.

Moreover, since they are still in use, the modern version of these knives is a great fit.

Also, using this knife is not a complicated task. In fact, the shape of the blade makes it ideal for fighting/combat situations. So, it is simple to find an instructor for the same. Also, the overall blade shape protects the wielder while using this amazing knife.

Other practical uses of the bowie knife are as a camping knife, tactical knife, kitchen knife, survival knife, and fighting knife. These quality knives are popular among ambitious knife swingers. 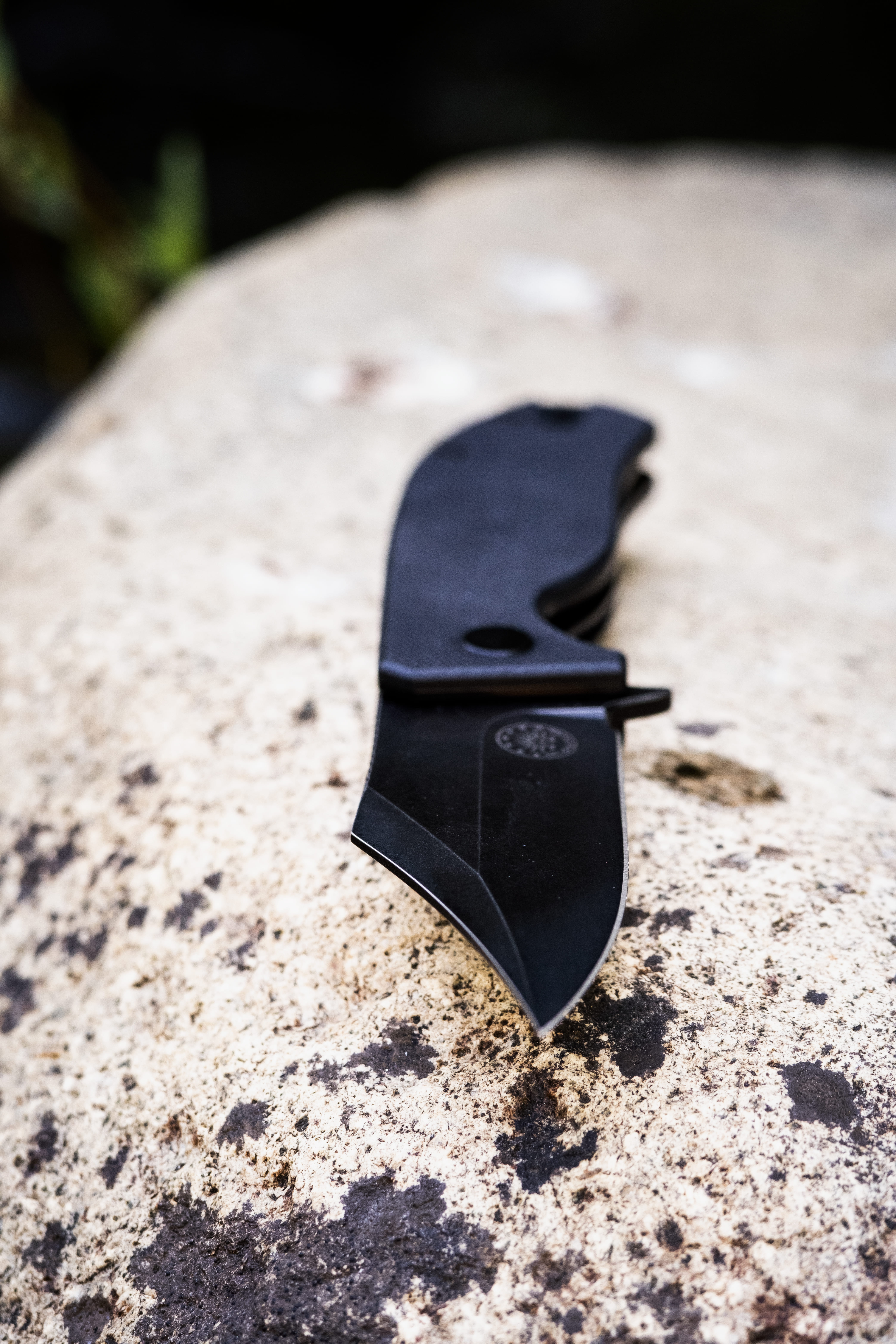 But, as we mentioned earlier they are not so carry-friendly.

Should you buy a Bowie Knife?

Remember the solution we mentioned while talking about the features?

Your knife with a fusion of toughness and easy carry. Perfect for your adventures.

So, if you are someone who is looking for a tough combat knife or a self-defense knife that is easy to carry around, then you could go for these awesome knives. 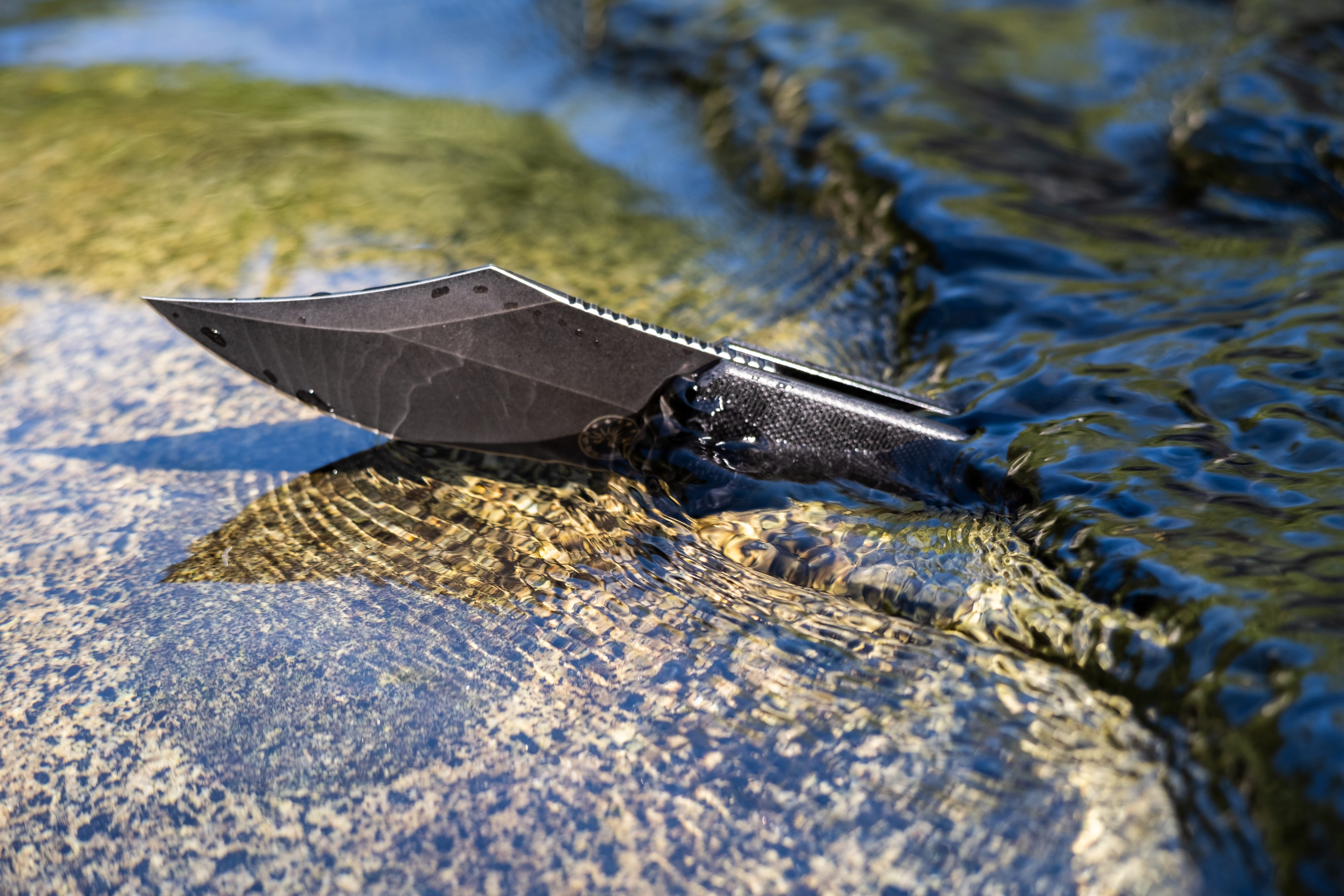 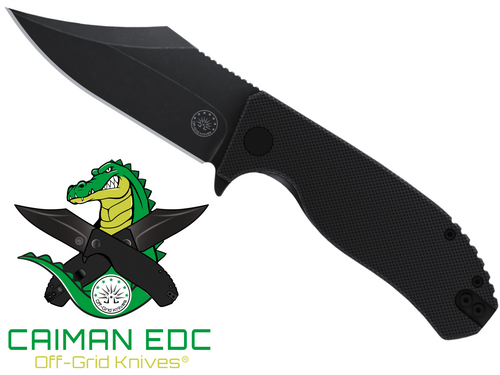 CAIMAN EDC
The Caiman is the perfect size for EDC and the action is amazing...the blade shape is awesome, and the grip is comfortable for all day use. This blade jumped to the top of my everyday carry list. - Nils B.
Shop Now
OVERBUILT HARD USE KNIVES
Our knives are over-engineered for all of your off-grid adventures.
CHECK OUT OUR PRODUCTS
×