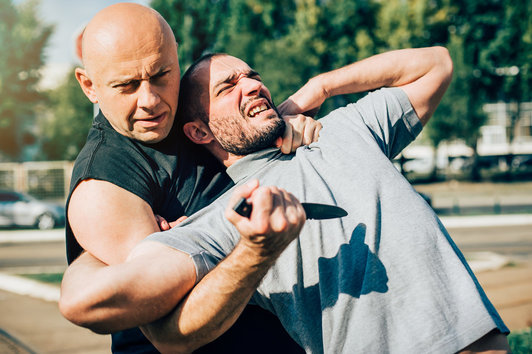 Defending against a sharp blade is one of the first things our prehistoric ancestors must have learned.

Recently, this ancient skill has begun making a comeback, and new defense techniques have been developed based on the popularity of an everyday carry knife members of the public use.

Knife attacks are unnerving because they can come out of nowhere. You can’t predict them. Knives can do a lot of damage in just one swipe.

When it comes to self-defense against blades, there are several specific techniques you might find effective.

The first thing to remember always is to remain calm and focused.

Don’t make any sudden moves which might precipitate an attack before you are ready. Size up your attacker.

Think about his motive. Is he mentally unstable? Is he under the influence of alcohol or drugs? Is he trying to attack you, or did you just get in his way when he was involved in another crime?

Adopt a guarded stance. Your aim is to protect major organs against knife wounds. Try not to extend your body past your guarded area.

If the attacker lashes out with his weapon, you’re also an easy target if you stand still. Move like a boxer. Feint, weave, and bob. Your job is to make yourself a hard target to hit.

Those with a knife will likely use one of three moves. They will slice to open your skin somewhere maybe cutting nerves, veins, muscles, arteries or even organs.

They might also stab. This is a jabbing motion with the knife. The attacker’s aim is to stick the blade into you. His best target is a vital organ. This is harder than the movies make it look.

The third move is a parry. If the attacker is not experienced with a knife, he won’t expect this. It looks like the sword fights of old.

If you have to defend against a knife, don’t expect one move will do it. Drawing blood doesn’t mean the attacker is done.

Focus on avoiding getting injured rather than injuring the attacker. Concentrate! If your attention strays, it leaves you open to attack.

Protect yourself and stay close so he cannot slash at you. Don’t flail your arms around. Guard critical areas like your stomach, your face, your neck, your groin, and your chest.

Take a glance around you. If possible, grab something to block the knife slashes. Look for a stick, a broom handle, or even a shovel.

Grab anything available to stop the knife and distance yourself from your attacker.

Try to trick the knife-wielding opponent so he thinks you are moving in when you’re moving out, left when you’re going to go right.

This is called a feint. Its purpose is to throw your opponent off balance.

It’s always wise not to get into a knife fight. But, sometimes, you have no alternative. Your concealed weapon may not be able to stop someone with a knife.

If you are interested to buy an everyday carry knife, we have several models you might find appealing. Please contact us if you have any questions.