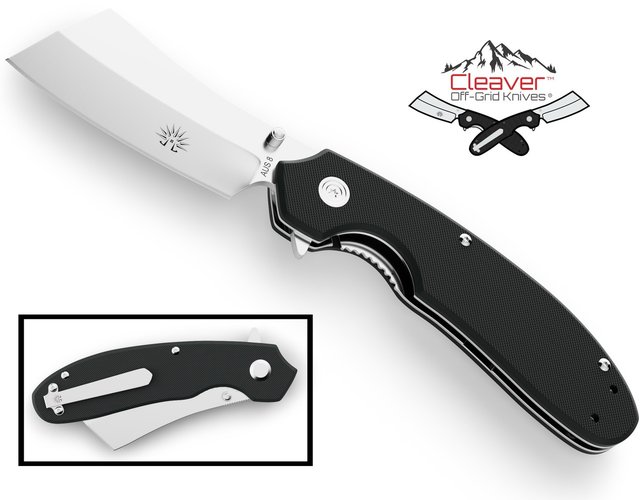 Most of these cleavers are large butchering tools, rather than a folding cleaver pocket knife you might buy for everyday carry.

A cleaver is memorable because it carries an implication that the user will not only kill but dismember the victim. The weight of cleavers is for breaking through tough meat and bones, which adds to the chills experienced when you see one on or off a movie set.

Examples of Cleavers in Video Games

In video games, a cleaver often implies a high level of damage will be inflicted, due to the size and weight of the weapon. Equally, this communicates to players that the attacks might be slow or unwieldy when compared to a lighter blade. In action games, the player prepares to dodge attacks and attempts to retaliate while the wielder recovers from their swing.

Silent Hill: Origins chose to equip the Butcher enemy with a Great Cleaver, again working on the association with meat preparation. It is likely that the game designers wanted to make the player feel additional tension and fear at the idea of being cannibalized if killed.

The cleaver becomes available to the player once they obtain a certain ending. Using the cleaver depletes stamina faster than other weapons, emphasizing the size and weight of the object – hinting at a great deal of power.

Other games use the cleaver in similar ways, as a large high-damaging weapon that is slow to wield. Bloodborne has an example of a cleaver that folds in like a razor blade and has teeth like a saw. Naturally, this would be impractical in real life but further adds to the visceral horror of the object. There is an interesting video in the YouTube series MAN AT ARMS, where blacksmiths recreate the object in real life.

Examples of Cleavers in Movies

Hollywood tends to be less concerned with the functionality of weapons than many games, presenting even less realistic usage, stylized for viewing entertainment.

One example is Cleaver: Rise of the Killer Clown, which features the cleaver prominently on the front. The weapon is turned to the side on the cover, revealing clearly the identifiable shape of the cleaver. This leans into aforementioned ideas about butchery and murder, followed by further dismemberment and perhaps cannibalism.

Using a clown is an additional way of adding horror, as many people possess phobias of clowns. It also juxtaposes the supposed joy that clowns bring with images of horror, creating a sinister and disturbing combination.

The Visual Effect of Cleavers

Cleavers are particularly effective for intimidation. The sight of a cleaver is often enough to startle or disturb an onlooker, which makes cleavers ideal if the intention is to scare a potential threat away.

The same applies to a folding cleaver pocket knife for sale online. Despite its compact size, once unfolded a pocket knife possesses the same unmistakable blade shape that carries all the associations of a butcher’s cleaver.

Although many wouldn’t consider a cleaver for everyday carry, their additional weight, and visual impact do have the potential to be advantages in a number of circumstances.

Furthermore, the pure and brutal look of a cleaver adds an additional wow factor, which can make the choice of purchasing a cleaver pocket knife even more appealing.